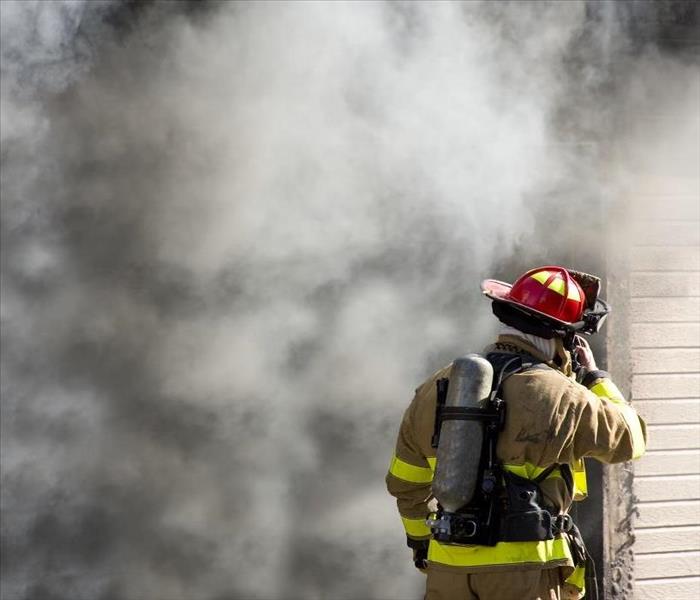 SERVPRO has the training and equipment to thoroughly rid your home of the odors left behind by fire damage.

In small to medium fires, most of the cleaning cost to a Nashua homeowner is from smoke odors and residues. Cleaning residues can take a lot of time and effort, but the results are fairly easy to see. Eliminating odors is often a more difficult task.

Chemical Containment is the initial phase. Our technicians spray a deodorizing agent directly onto any visible smoke residues. The agent forms a barrier that slows or stops the evaporation process which prevents odor particles from turning into a vapor. This free vapor is the actual smell in the air.

Vapor Odor Control is phase two. For odor particles already in the air, SERVPRO technicians use counteragents or deodorant vapors to block them. Simply put, the granular counteragents contain a variety of stronger, more pleasant odors that overcome smoke odors.

Thermal Fogging is phase three. For very strong and difficult to remove odors, technicians use the heat generated by a thermal fogging device to break down a deodorant chemical to the same size particles as the odor vapor. These deodorant particles bond with them, which neutralizes the odor particles by changing their chemical composition. The fog evaporates in just a few hours and leaves behind almost no moisture to stain personal or structural property.

This reduced moisture also makes thermal fogging perfect to prevent color running on delicate fabrics, upholstered furniture, and building material sensitive to too much moisture, like drywall. Not every residence needs all three phases to clean and remove odors. Technicians examine the property after each action to determine if they have finished the job, need to repeat a phase, or move to the next phase.

Removing odors from your home is perhaps the most difficult part of the restoration. We have to eliminate every trace, or the smell returns as strong as before. SERVPRO of Nashua has decades of experience in odor removal and can help you return your home to its pre-fire condition. Call us at (603) 889-2311 today to get started.

To learn more about fire safety in Nashua, click here.