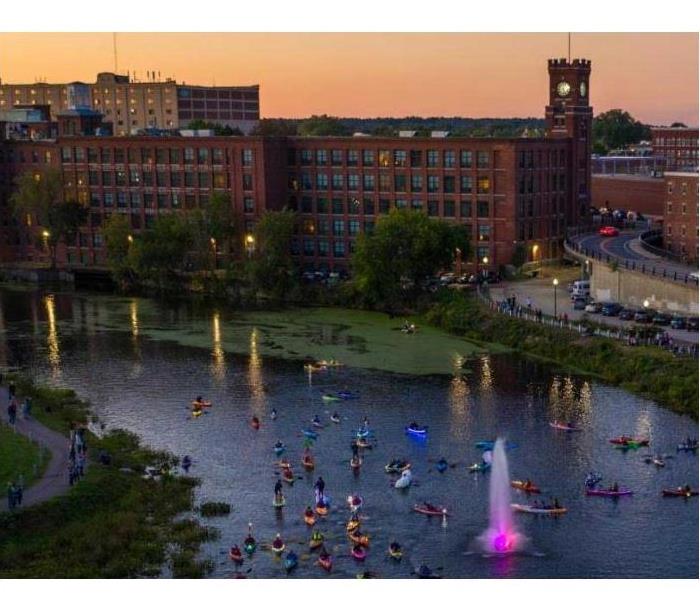 SERVPRO loves our community. Call us should you incur fire damage. We will restore your home like it is our own.

Nashua, New Hampshire, is home to over 89,000 citizens as of 2018. The Gate City is currently crucial to such businesses as:

The city's name originally comes from the Nashuway tribe, Nashua being a Penacook word referring to both a pebbly-bottomed beautiful stream and land located between two rivers. Nashua is situated between the Nashua and Merrimack Rivers and was initially formed by acquiring a 1673 land grant for a settlement named Dunstable.

Historically, Nashua was well-known for its textile manufacturing. Still, when demand declined due to advancements in technology and agriculture, much of this crucial industry moved to the southern United States, closer to where staple textile crops like cotton were cultivated. Manufacturing in Nashua waned between World War I until after the end of World War II.

Two significant industries played a significant role in the city's revival in the mid-twentieth century: defense and technology. Today, Nashua is a booming New England city with extensive recognition for being one of America's best places to live. The city won the number one spot for this category in Money magazine's annual surveys in 1987 and 1998.

The Gate City is, unfortunately, no stranger to the devastation that fire can cause to a community. In May of 1930, the Nashua Fire destroyed 500 citizens' homes and incurred over $2,000,000 in property damages, a staggering figure for the time. Other reported properties razed by the flames included two churches and four manufacturing plants.

The fire, which ignited somewhere along a wooden Boston & Maine railroad bridge, was exacerbated by winds exceeding 40 miles per hour, which fanned the flames toward Nashua's residential area. It took several fire rescue teams from neighboring communities to successfully suppress the inferno.

However, during such trying times, heroes are bound to show themselves. Almost a dozen priests, including Fathers Ubald Simoneau and Isadore Janelle, who coordinated to lead 600 children to safety as the flames threatened their church during a play performed in the hall. Father Janelle also salvaged some of the church's sacred vessels before collapsing and being rushed to the hospital. The clergymen's swift actions saved hundreds of lives from the flames that would engulf their church a mere ten minutes later.

In the 1950s, a new church was constructed, and by 1960 the burned convent had also been restored. To this day, the Infant Jesus complex is used as a church, convent, and school.

Collaboration is a vital part of what has helped keep Nashua safe from destructive fires. The Nashua Fire Rescue evolved from a volunteer fire department in the 19th century into a full-time effort nearly a century later. The fire department in Nashua is New Hampshire's second-largest and currently has an Insurance Services Office (ISO) 2 rating.

Fire departments are scored from 1 to 10, with 5 being both the mean and median score. A 1 is awarded to 0.71% of all communities participating in the FSRS program.

Nashua's Fire-Rescue service sports 176 career firefighters and administrative staff, six stations, a training site, and a dispatch facility. The team responds to a whopping 20,000 service calls per year to protect over 7,000 businesses and almost 90,000 citizens. The average response time in 90% of cases is less than four minutes after a service call.

Fire suppression is essential for keeping communities safe. SERVPRO technicians aid in the restoration process after a fire is extinguished to keep communities safe after a disaster while preventing further damages.

SERVPRO technicians are certified to provide Nashua homes with fire restoration services covering everything from removing unsalvageable debris to performing necessary structural and contents repairs to restore a residence to its preloss condition.

Smoke and soot damages can cause significant stains on odors, particularly on porous surfaces like clothing, upholstery, drapes, and carpeting. Water damage may also be present from fire suppression performed by firefighting services. HVAC systems and ventilation intakes can also house copious amounts of soot, requiring various degrees of both manual and chemical intervention to salvage ductwork and mitigate odors.

SERVPRO technicians use EPA-registered solutions to combat soot and odors. Cleaning products include:

Hydroxyl generators are another noteworthy means of odor control that can also eliminate volatile organic compounds (VOCs) from an environment. These generators dismantle these concerns at the particle level and mitigate the effects of over 5,000 known chemicals and compounds that can affect a home's comfort.

SERVPRO of Nashua renders emergency fire damage response service for homeowners that is Faster To Any Size Disaster. Call (603) 889-2311 to have an experienced crew at your home to coordinate with you and your insurance adjuster.